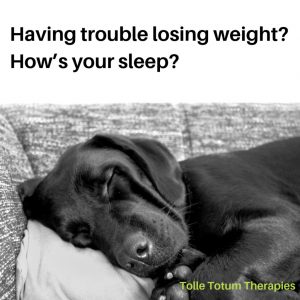 *
Did you know that poor sleep significantly effects insulin activity and your resting metabolic rate? Burning the candle at both ends, tossing and turning during the night, or even worse – insomnia – can lead to weight gain and type II diabetes.
*

Insomnia is the inability to sleep and there are many reasons people may suffer with it, but here are a few common causes:

Type II diabetes occurs when the body’s cells become resistant to insulin. Insulin works like a transporter, carrying glucose into the cells that is then used for energy production. If the cells can’t get their sugar fix, they become starved (and this is why you crave carbs). The glucose stays in the blood where it can cause a lot of inflammation and damage to organs such as the eyes or even limbs (diabetic-induced ulcers and amputation).

How does sleep deprivation lead to weight gain and diabetes?

Cortisol, one of our stress hormones (although it does many other things in the body too), is supposed to be at its lowest at night, helping us drift off into a deep and blissful sleep, and then begins to rise in the early hours of the morning to wake us up again. But if you are chronically stressed, your cortisol can go on a rollercoaster ride that significantly impacts on your ability to sleep.

High cortisol levels not only keep you awake, they stimulate the production of blood glucose (because we need the energy to deal with the stress) and our bodies quickly become insulin resistant, even after only 24 hours of sleep deprivation.

Other consequences of sleep deprivation include the production of inflammatory molecules and free fatty acids that accumulate in your adipose (or fat) tissue.

High cortisol-induced sleep deprivation leads to cravings for fatty foods and carbohydrates (chocolate anyone?) by the same mechanisms, leading to further weight gain.

Who feels like exercising when they are exhausted? Not many people I would say, and the science backs this up. Sleep deprivation typically results in more sedentary behaviour also leading to weight gain.

Too much sleep can be just as bad according to the research.

So what is the magic number to aim for? Those who get less than 6 hours or more than 9 hours per night have a much higher risk of central adiposity (that is fat around the middle) than those who get between 6 and 9 hours.

Sorry to be a bummer. BUT there is some good news. Studies have shown that you can turn this all around in only nine days!
*
How you might ask? Well let me share my top sleep tips with you:
*
1. Exercise for 20-30 minutes daily (preferably in the middle of the day, in the sun!)
*
2. Avoid stimulants such as coffee, tea and chocolate after 3pm (or earlier if you are sensitive like me)
*
3. Use dim lighting of a night (I love my salt lamps for this) to avoid blue light which messes with your circadian rhythm; even better invest in a decent pair of blue blocker sunglasses (especially if you are looking at a screen)
*
4. Switch off your screens at least an hour before bed, or wear blue blocker glasses (see point 3)
*
5. Don’t eat after 7pm so your body can do its night shift work (rest and repair) instead of digesting that late night snack and keeping you awake
*
6. Meditate for 5-10 minutes before bed or have a warm (not hot) Epsom salts bath
*
7. Switch off your phone and your wifi – microwave radiation is not your friend
*
8. Establish a regular bed time, wake time and sleep routine and stick to it
*
9. If you want to go ‘next level’ (and this is A-MAZING for your health), watch the sunrise AND the sunset
*

Sleep is THE most important thing when it comes to your health. Remember there is no magic pill so it’s up to you to make the changes you need to be the best version of you.  Make a booking today to get the support you need.